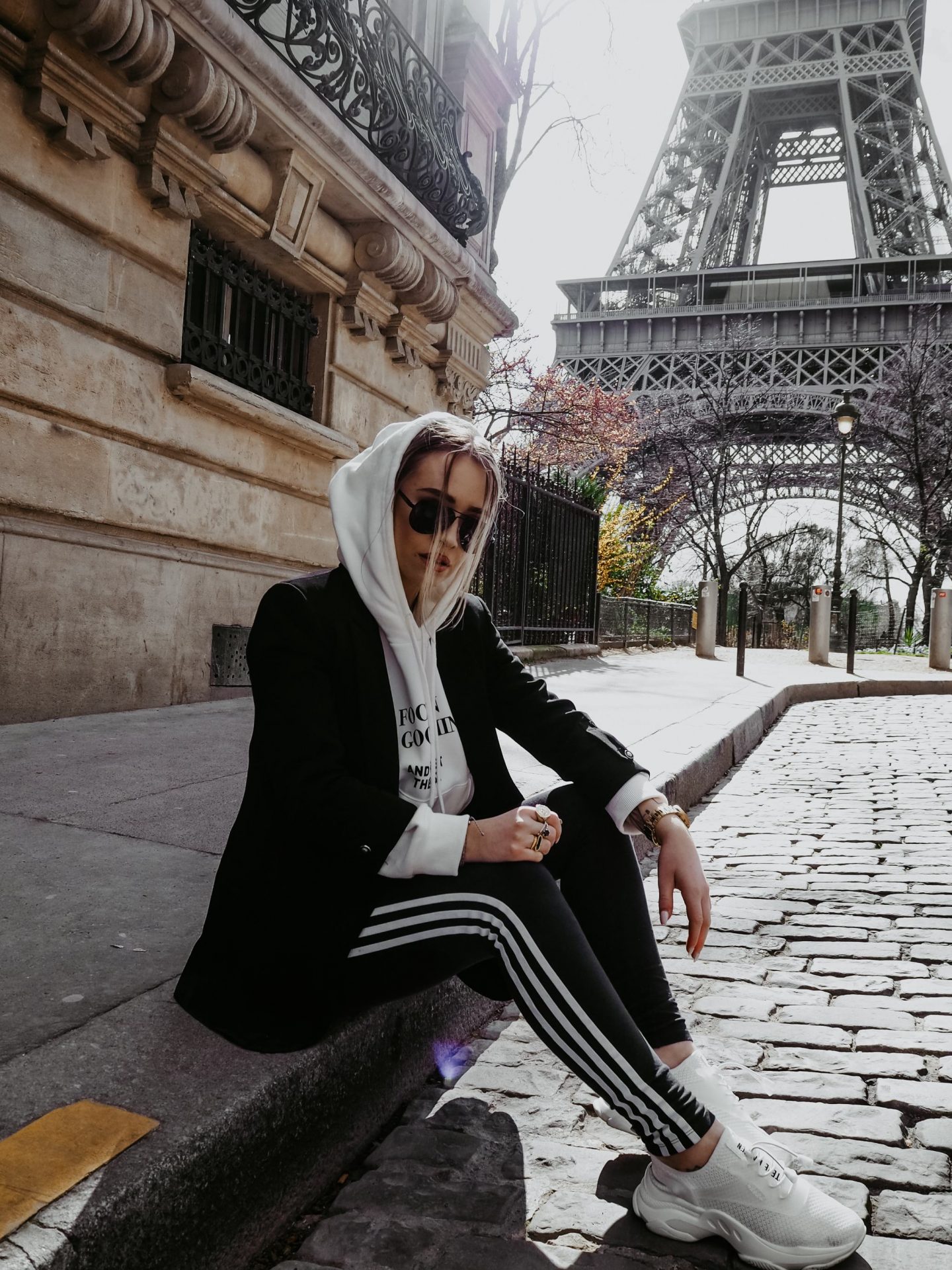 Ahh Paris, the city of love! Paris has been at the top of my city break bucket list for much of my teenage & adult life. I can’t remember when I first fell in love with the idea of the city, but as I’ve got older and watched increasingly more romantic movies, my need to visit has only grown. I think it was falling in love with Moulin Rouge in 2017 however that solidified my absolute need to visit this incredible city and this year was finally the year I could tick it off my list. So without further ado, here is my guide on how to spend 48 hours in Paris!

We actually left it quite late to book our trip, only finalising dates, flights and our hotel about three weeks before we went. I’ve never left it so late to book before and my inner self was having a bit of a panic about it all but it actually turned out to be the best decision we could have made. By leaving it a little later we ended up being able to get our flights and a city centre hotel for under £200! We flew with Easy Jet from Manchester and I honestly think they were the two smoothest flights I’ve ever been on in my life. One thing to bear in mind (I had never flown with Easy Jet before so I wasn’t aware of this beforehand) if you’re flying hand luggage only you can literally just take on one bag, not a cabin case and accessory unless you’re an Easy Jet Plus customer. Luckily I had checked luggage so I didn’t need to worry about this but quite a few people had issues with it at the airport.

We stayed at the Best Western Plus de Neuville Arc de Triomphe and you guys, I can’t rave about this hotel enough. I always think that Best Westerns have a bit of a dodgy rep in the UK as being a bit old and tired so I was worried it would be the same in Paris but I couldn’t have been more wrong! Everything about the hotel was modern, clean and well presented. The room we stayed in was on the top floor and was so cute and cosy! The only complaint was that we were next to the lift shaft and the lift was very old and noisy so there was a bit of noise disturbance from that but nothing to keep us awake or really disturb our stay in any way. The hotel is located about a 15 minute walk from the Arc de Triomphe and close to a few convenient Metro stops too. I’m hoping to head back to Paris for a girls trip with Mum later in the year and I’m definitely going to try and book the same hotel again!

Ok you guys, confession time: I actually can’t really remember any of the places we ate. Mostly because it’s been almost two months since we went (sorry it’s taken me so long to get this post up!) but also because we struggled a little on the food front. As you may already know, I’m vegetarian and also quite the fussy eater. These two things combined make me a bit of a nightmare when it comes to getting food, and as Paris doesn’t cater in a huge way to vegetarian diets, we struggled a little. I did get a few recommendations for places to go that I really wanted to check out – I think Hank Burger was one that came highly recommended – we never ended up making it over to have a look, instead favouring finding a quick bite wherever we were exploring that day.

This is why I am clearly not destined to be a food blogger. I will say however that I tried my first ever macarons from Laduree on this trip and holy crap, you guys, I am an addict. I can’t wait for my next trip down to London so I can grab some more!

So, down to the important stuff, what we actually did in Paris! Our flights out on the Monday (my birthday!!) were quite early in the morning which we wanted so that we could maximise the time we had for exploring. By the time we’d landed, figured out how to get a bus to our hotel, and checked in it was about 2pm. We left our luggage with the hotel and went out to grab some lunch before coming back when our room was ready. After a short freshen up, it was off to the Louvre to tick another item off the bucket list: The Mona Lisa.

I’m a massive art lover having studied it for years, so the Louvre is a gallery I’ve wanted to visit for as long as I can remember. We didn’t have much time to explore as we arrived about an hour before it shut, but it was incredible to see some of the art they have there. Obviously the piece de resistance was seeing the Mona Lisa in the flesh, although I will admit it wasn’t perhaps the experience I would have liked to have had. Mum had told me prior to going how small it actually is in real life so I was prepared for the size, but what I wasn’t prepared for was the sheer number of rude tourists shoving in front of me or physically barging me out of the way to get a look at it or grab a selfie in front of it. I actually ended up giving up after about 10 minutes of craning my neck to see over the huge crowd but that’s not to say I wouldn’t visit it again next time I go. I think perhaps getting there when the gallery opens and heading straight for the Mona Lisa would work better. We had a great time admiring some of the renaissance work on our way out, before happening upon a room of beautiful religious scenes some of which dated back over 900 years. It was actually very humbling being around works of that age and I would love to go back and look at them again.

After the gallery closed we found a bistro close by for some birthday drinks before heading to another nearby cafe for some dinner. It was possibly the most overpriced pizza I’d ever eaten in my life but by that point we’d been up since 4am and were ready for bed so there were no complaints from me. It was time for an Uber back to the hotel and an early night ready for the next day of exploring.

We were up bright and early on the second day ready to head straight to the Arc de Triomphe. I was absolutely blown away by the sheer scale of it up close, it’s such an incredible piece of architecture – we stayed there for quite some time admiring it before we headed onto the Avenue des Champs-Élysées. We grabbed some lunch at Paul, and then had a wander round some of the shops including Sephora and Louis Vuitton. I think I mentally spent about €20,000 in that store, it was unreal.

It was time for a wander, so we headed out on foot to find the Eiffel Tower. It was quite a trek from the Avenue des Champs-Élysées but totally worth the walk, especially in the nice weather. Of course I had to take the Instagram snap before we headed to the park beneath the Eiffel Tower to enjoy the atmosphere. On the way, we got stopped by two men who said hello and suddenly wrapped a load of string around my finger. Before I could say anything or get them to stop they’d tied a bracelet around my wrist and were trying to charge me €20 for it so make sure you watch out for that if you’re visiting. From there, we got an Uber to the Notre Dame – another incredible experience. I was so humbled again by how long it had stood for and the history surrounding it. It was incredible to walk round and see the artefacts inside. We then grabbed some fries and a drink from a little bistro nearby before jumping in another Uber and heading to the Galleries Lafayette to wander round. Now this was my idea of shopping heaven and I’m definitely going to be saving up for when we make our return trip.

The third day was more of a half day for us due to our flight time, so we were up bright and early to check out of the hotel and head to the final destination we really wanted to tick off our list: Montmatre. I was so desperate to visit Montmatre as it is where Moulin Rouge is set and is of course home to the real Moulin Rouge! We started off by admiring the view outside the Basilique du Sacre-Coeur (which was sensational) before heading inside. Now I’m not religious, and I’ve never really been one of those people to be completely overcome by a religious building but this was something else. The singing when we walked in and the sheer beauty of both the interior and exterior of the building completely blew me away. It was absolutely stunning and I genuinely think it’s something that will stay with me for a long time.

After that, we wandered around the streets until we came across a central square which was surrounded by cafes and bistros and in the centre had a huge array of street artists painting. This was so beautiful to watch and the atmosphere was incredible – it almost made up for being vastly overcharged for a salad and some chips (€40!!!!). Finally, it was off to find the Moulin Rouge – I do wish that I’d gone inside and actually seen the show but again that’s something for next time I visit! We had a couple more hours to kill before our trip back to the airport so, on our way back to the hotel, we stopped off at the opera house for a look around which I would also highly recommend! Finally, it was time to go home.

It was with a heavy heart that we boarded the plane but I have so many fantastic memories from the trip and I’m so excited to visit again (and again and again). I vlogged our trip too so you can see that video here: watch here. I really hope you have enjoyed this post! I’m annoyed at myself for not having food recommendations for you but I hope I’ve still given you a good idea of how to spend 48 hours in Paris 🙂

Let me know in the comments if you’ve been before and what you got up to! Also please feel free to leave some recommendations too for things I need to see or do next time! Remember to also check out my Amsterdam travel guide too!