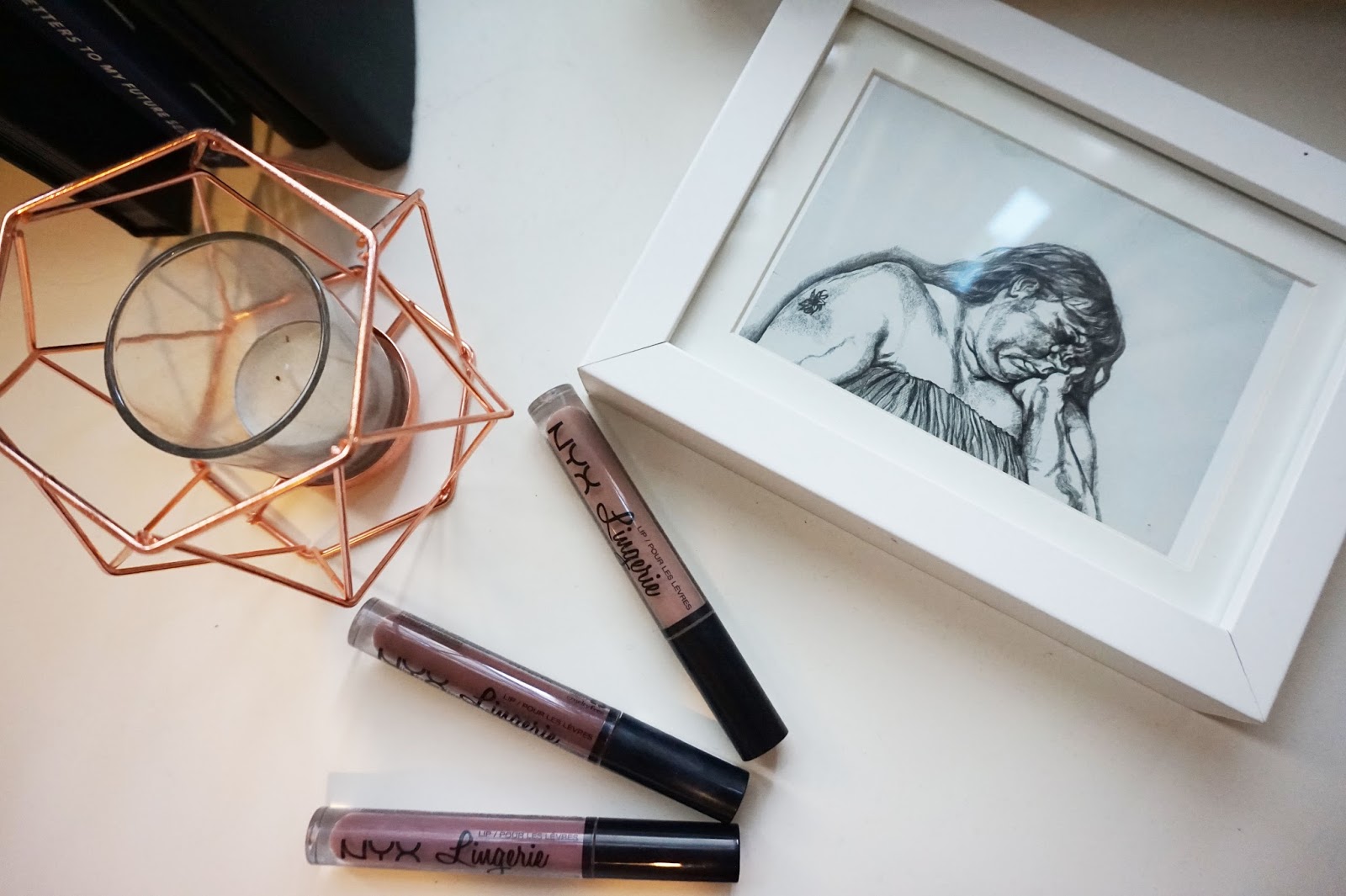 Prepare yourselves guys, I’m going to attempt to write about beauty products again.

(This is something I haven’t actually attempted since last year so it’s probably about time).

Liquid lipsticks are a bandwagon I’ve jumped on the last few months. I can’t remember when I first became aware of them, but to begin with I guess I thought they were a bit of a fad, however the more prevalent they’ve become amongst bloggers and Youtubers the more I’ve wanted to give them a go myself.

I decided to start off small scale, and rather than blowing a load of money on a Kylie Lip Kit or a liquid lipstick from a brand like Kat Von D or Jeffrey Star, so I picked NYX. I remember the first one I tried would actually have been around December time last year when I grabbed one of their Lip Suedes in the shade Stone Fox which is a really deep grey with green/blue undertones, however I wasn’t too enamoured so it wasn’t until moving to London that I decided to try them again with some more neutral tones.

Then the Lip Lingeries were released and the world went mad. 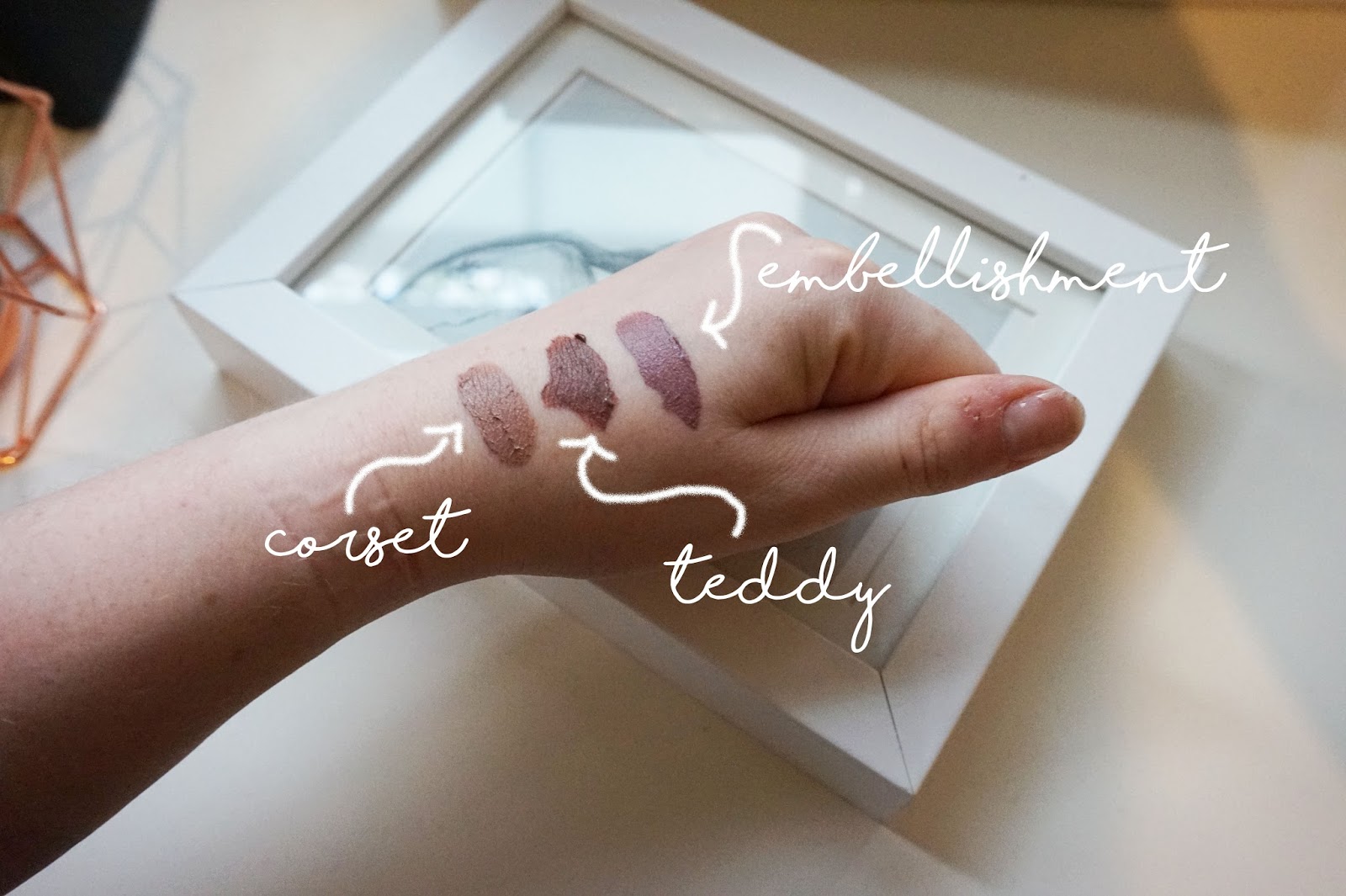 I looked in every damn Boots store in Central London trying to find these bad boys. It took me a while but I finally tracked them down in Westfield Stratford a month or so ago and spent a while swatching away trying to decide on my favourite shades. At the time I didn’t actually pick any up, I wanted to wait until a) I was sure which colour I wanted and b) until I could afford them. In the end, I ordered a small selection off the Boots website this week and eagerly awaited their arrival.

I’m not going to go too in depth about how they compare to the Lip Suedes because I’m actually going to do a full review video on both ranges and compare them on that. I have however been wearing each of them throughout the week and to various different events such as birthday meals, marketing conferences and days in work to see how they hold out.

I ordered three shades – Corset, which is a light nude ‘my lips but better’ type shade, Embellishment, which is a gorgeous dusky pink colour and reminds me a lot of MAC’s Velvet Teddy or Brave, and Teddy, a deep brown shade with a blue undertone. I was surprised at the consistency of these lipsticks – while the Lip Suedes go on very smoothly and are quite creamy, these are really thick and, well, a lot more ‘lipstick-y’.

I wore Embellishment first for the birthday meal and it held up really well under the pressure of a spicy quinoa burger. These lipsticks are very matte and so it did feel quite drying on the lips and was initially a little sticky following application but this was something that after 5 or 10 minutes I stopped noticing. I loved the colour on me and I found it to be really pigmented – I only needed two layers to achieve a really rich colour which I was surprised about as I’d read that they weren’t as pigmented as the Lip Suedes.

Corset I wore to my marketing conference. When I swatched it on my hands, I assumed it would be a my lips but better shade however when I first put it on I was a little concerned that it looked like I was trying to bring back the concealer lip trend that we all thankfully left behind us in the early noughties. I think a lot of this has to do with the fact that I’m still wearing my summer foundation shade which is a little darker than I’d normally wear, so I’m withholding true judgement until I’m wearing my correct shade again – but by combining the lipstick with MAC’s Stripdown liner I got around the issue and it was a really nice colour. Again it was slightly drying and sticky to begin with but it dried super quick and stayed the whole day.

Finally, I wore Teddy to work on Thursday. This one is my favourite out of the three in terms of colour, but my least favourite in terms of consistency. I had to layer it a little more than the others which created a sticky and quite annoying sensation on my lips. Once it had dried it was more or less like the others until it came down to eating. It didn’t hold up against my sandwich and I ended up with that half on half off lipstick look which is super attractive. I re-applied and then had little dried bits of old lipstick under the new lipstick annoying me for the rest of the afternoon which I ended up picking off with my teeth. Cute.

Stand by for a series of awful after work selfies so you can see how they actually looked on – note: the lighting in my room is horrific and yellow so apologies. Also I’m not actually oily. 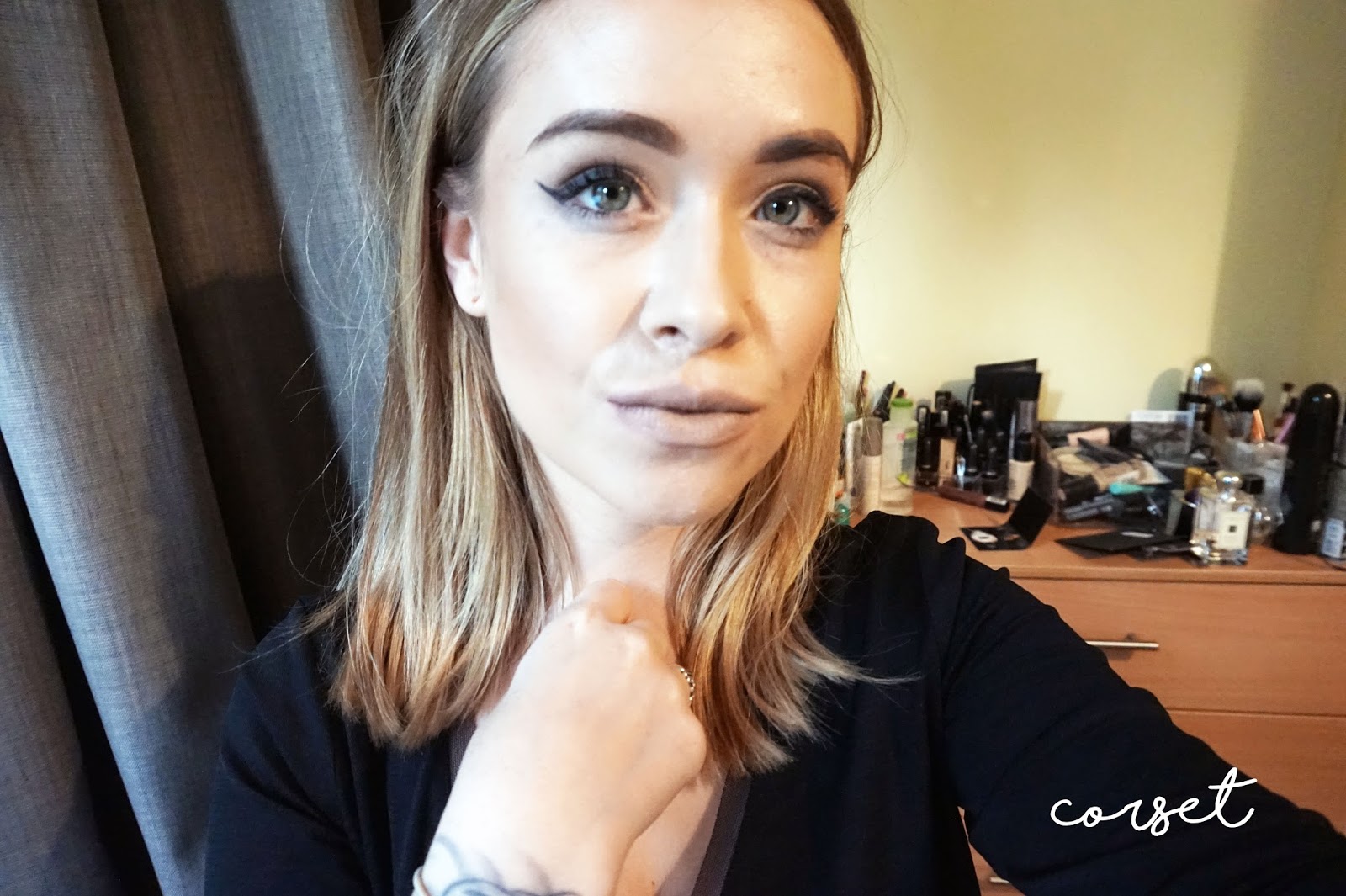 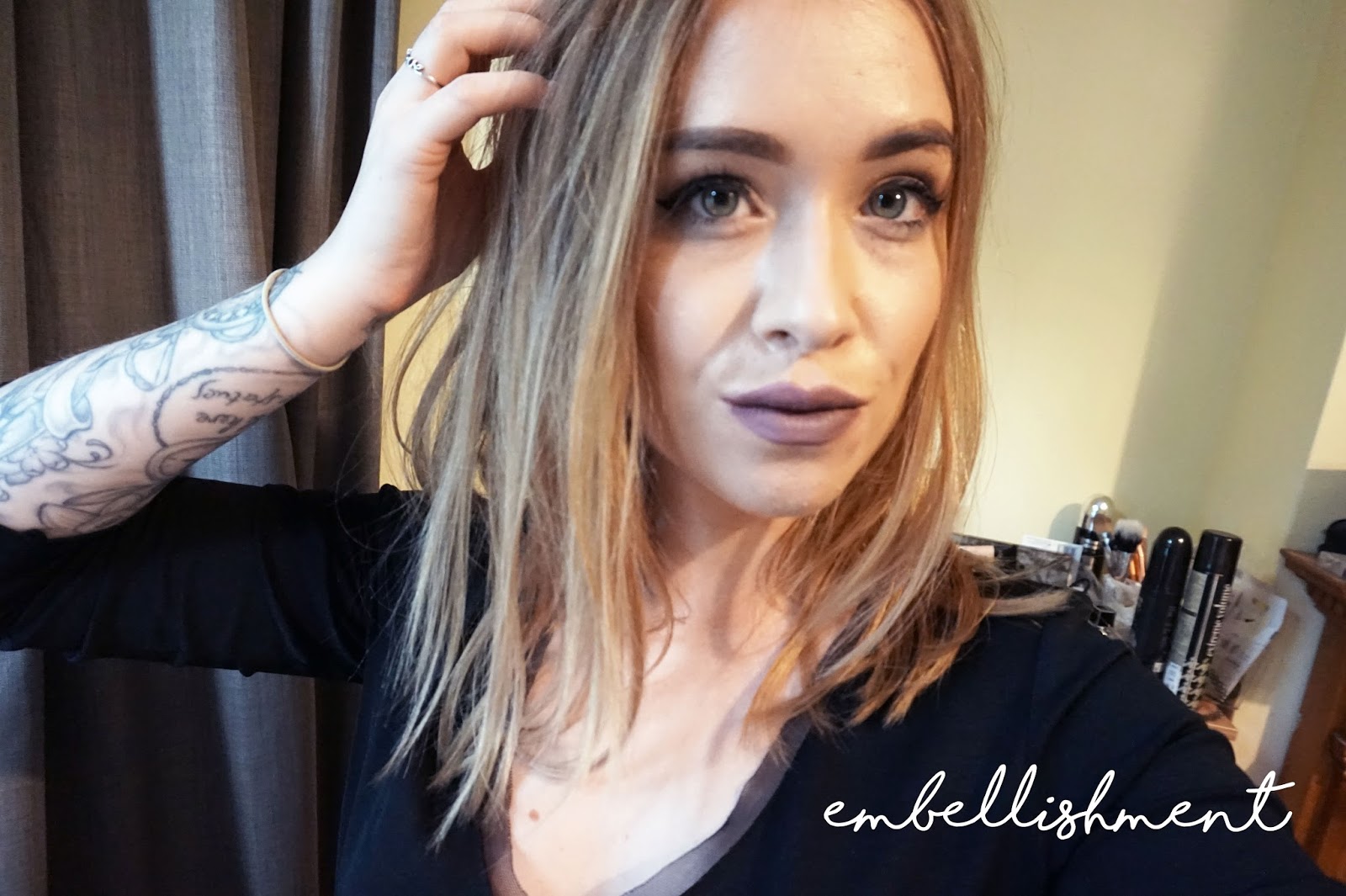 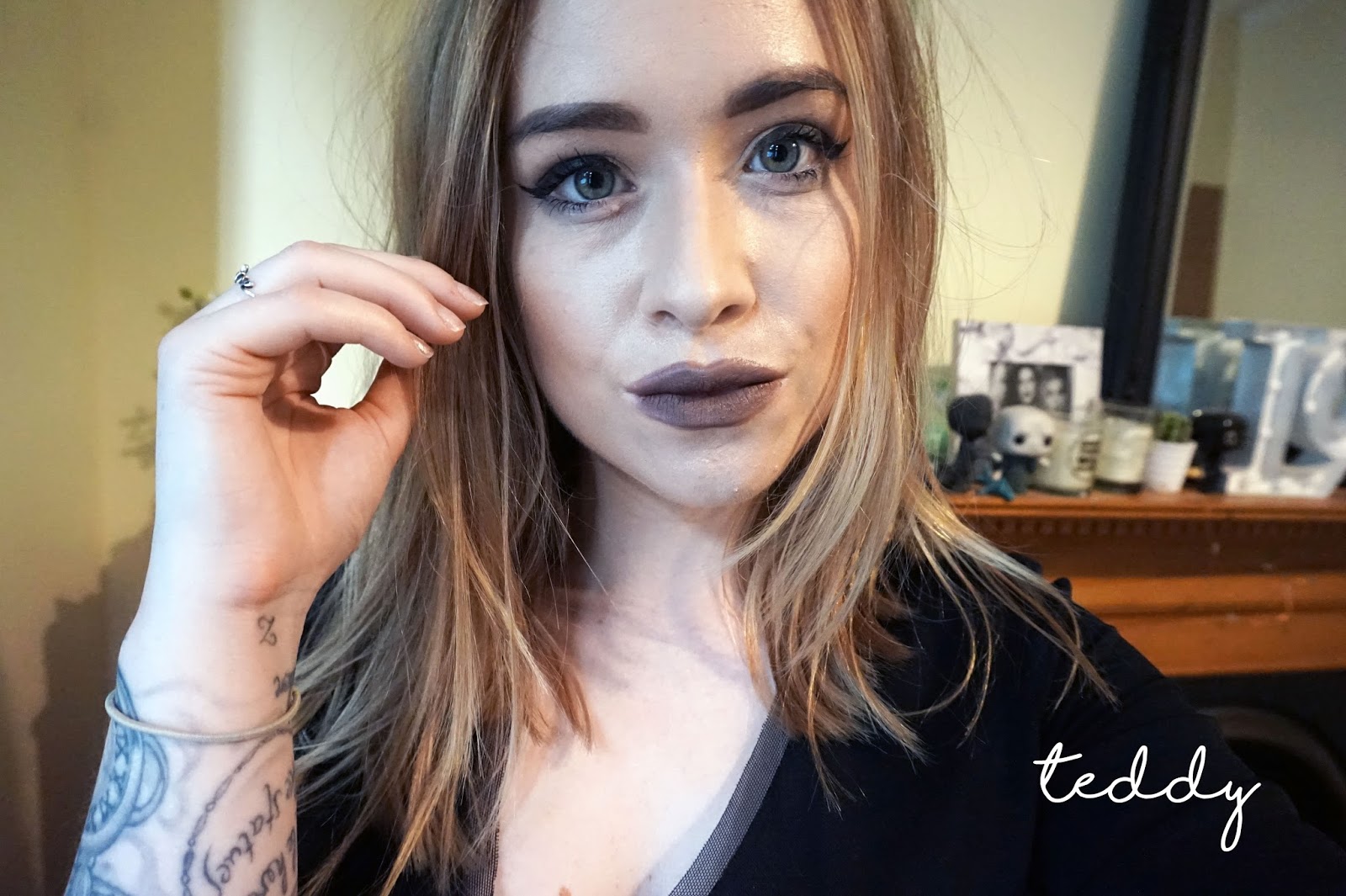 All in all, I do really love these lipsticks – even Teddy. I think in the future I’ll wear a lip balm underneath them to combat the drying and potentially lipliner also just to make the application process neater.

Do you own any of these lipsticks? Let me know what you think of them in the comments below.